Welcome to the Site of the Brunswick Community History Group

BCHG was formed in 1983 and aims to explore the history of the area covered by the former City of Brunswick.  It incorporates the suburbs of Brunswick , Brunswick East,  Brunswick West and a few streets in North Fitzroy.

Check Out Our Publications

Take a look at our publications which are available to buy

We are happy to answer inquiries from members and others.  A charge may be made for more extensive research.  This will be discussed with the inquirer when appropriate

Watch Slideshows of our Photo Galleries

Our site has many photo galleries. Click here to view them

BCHG operates on the un-ceded lands of the Wurundjeri Woi Wurrung people of the Kulin nation and pays its respects to its elders.

BCHG was formed in 1983 and aims to explore the history of the area covered by the former City of Brunswick.  It incorporates the suburbs of Brunswick, Brunswick East,  Brunswick West and a few streets in North Fitzroy.

The City of Brunswick was incorporated into the Moreland City Council in 1994.

Membership is open to anyone with an interest in the history of Brunswick.

A Brief History of Brunswick

Brunswick is located immediately to the north of the City of Melbourne. It is bounded by the Moonee Ponds Creek to the west, Merri Creek to the east, Park Street to the south and Moreland Road to the North. 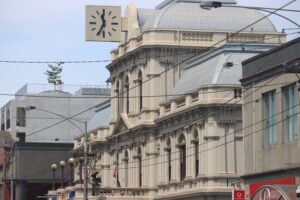 The original inhabitants were the Wurundjeri (also known as Woiworung) tribe of the Kulin Nation. They knew the area as Iramoo.

Brunswick was surveyed in 1839 and a number of farming allotments were created fronting on to the north-south track which later became Sydney Road.

One of the early purchasers was Thomas Wilkinson in 1841. He became the first Chairman of the Municipality in 1857.   He named his estate on Sydney Road near Albert Street “Brunswick” and the suburb took its name from this.  It is generally believed that the estate was named after Princess Caroline of Brunswick – the estranged wife of George IV.  As a young man in England, Wilkinson had been a supporter of Caroline’s cause.  Another theory is that it was named after the royal house of the newly married Queen Victoria.

Sydney Road soon became the main route to Sydney and to the goldfields and construction of the road began in 1851, initially using prisoners from the Pentridge Stockade in Coburg as labour.   Many hotels were established along the road to cater for people travelling to the goldfields.

Bluestone quarries were established near the Merri Creek from  the 1860s and much of the bluestone used in Melbourne roads and buildings originated here.   A quarry started by Alexander P. Wales in the 1860s remained in operation for about one hundred years and became the largest producer of Victorian road stone in the period after the First World War.

Clay quarries  and associated brickworks and potteries were also established from the 1840s.  A number of smaller operators such as John Glew, Thomas Manallack and the Stroud brothers established clay pits on the site of the present Temple Park and the Barkly Square Shopping Centre carpark.   Workers’cottages were built in the surrounding streets to house the workers in the brickworks.  Hoffman Patent Brick and Tile Company was formed by a consortium of businessmen in 1870.  Large clay pits were established and the large brickworks and pottery built in Dawson Street.

From the 1920s textile industries were set up in Brunswick.  Prestige and Holeproof were the two largest textile mills. Other industries in Brunswick included the large Miller’s Ropeworks and a number of foundries and food processers.

Affordable housing and plentiful employment opportunities made Brunswick attractive to new migrants in the period after the Second World War.   People from Italy, Malta, Greece arrived and by 1960 had transformed the formerly English and Irish working class nature of the suburb.  Later waves of immigrants came from Turkey, Lebanon, Vietnam and China. Restaurants and shops reflecting many different cultures appeared along Sydney Road and Lygon Street.

Political radicalism has always been part of Brunswick life.  There was a strong anti-conscription movement in Brunswick during the First World War with the community divided along Catholic/Protestant lines. Labor Prime Minister John Curtin lived at various addresses in Brunswick during and after the First World War During the depression the police attempted to ban public meetings and the Brunswick Council and community united in a Free Speech movement.  Artist Noel Counihan had himself locked in a cage in Sydney Rd in 1933 as a statement in support of free speech.

Brunswick’s population increased rapidly in its first century.  From 3000 in 1865, it was 18,500 in 1890 and 57,233 in 1930.  It remained at a similar level until the mid-1950s when it started to decline and was 55,900 in 1960.  Rising living standards meant people lived in less crowded conditions and it had dropped to under 40,000 by 1994.  Since then the population has increased again as large former industrial estates have been converted to residential use with many apartment buildings.

Brunswick  became a borough in 1857, a town in 1888 and was declared a City in 1908.  In 1994, as part of the state-wide amalgamation of Councils, the City of Brunswick was combined with Coburg and parts of Broadmeadows to form City of Moreland.

Random Brunswick Images From Our Site